Vismo app tracks expeditions in South America and the Himalayas

Posted by Internet Business Press in Vismo on April 27, 2016

April 27th 2016. York. People tracking apps from Vismo Tracking Solutions were used on used on two recently completed expeditions – Levison Wood Walking the Himalayas, and The Amazon River Run – to show their support teams where they were, allow visitors to the website of the Amazon expedition to track progress at any time and enable Channel Four to identify Wood’s location 24/7.

Both expeditions started in 2015 and employed a combination of the Vismo app on their smartphones and the RockSTAR Satellite Tracker for those areas where there was no mobile phone coverage.

It’s not the first time Vismo has sponsored and supported expeditions this way. In December 2013, British explorer and former parachute regiment officer Levison Wood started his nine month, 4,250 mile expedition along the Nile, through six countries, from its source to its delta in Egypt, with the Vismo app on his mobile phone.

Last year he set out from Afghanistan on a 1700 mile – or four million steps – trek along some of the most stunning but inhospitable terrain on the planet, in the Himalayas, again supported by Vismo. 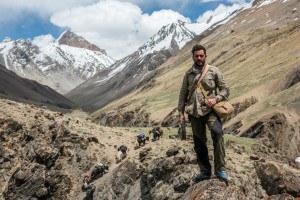 Levison Wood in the Himalayas

They could be tracked live at http://www.amazonriverrun.com thanks to the RockSTAR and the Vismo app identifying their position every hour. They were also helped by NASA – which has provided them with flooded rainforest data – and other sponsors.

Says Colin Dale, head of business development, Vismo, “The RockSTAR is ideal for the expedition environment as it offers truly global coverage using the Iridium Network and has a battery life of more than 2500 transmissions from a single charge. And it’s waterproof, which is ideal when you’re spending months in a kayak. In conjunction with our app it can pinpoint an individual’s position very accurately.”

Cellhire is a Queen’s Award winning independent company that has been in business since 1987 and is represented around the world with offices in Dallas, Washington DC, London, York, Paris, Munich, Tokyo and Russia.
The company works with network operators globally to provide short and long term mobile communication services for some of the leading companies in the world.

Posted by Internet Business Press in Vismo on October 2, 2015

October 2nd 2015. Vismo has enhanced its people tracking app [available on the Apple Store for iOS7 and iOS8] for the Apple Watch by enabling users to remotely operate the panic alert button without having to key in their security code.

The app is purchased by individuals – and by businesses as a “duty of care” precaution for staff working in hazardous or high risk environments, ranging from potentially dangerous work environments to areas where civil wars or terrorist incidents pose a threat to life and limb, and wherever kidnapping is a possibility.

“Users have been asking for this improvement because it can save valuable time. We have responded,” says Colin Dale, Business Development Director, Vismo Global Tracking Solutions. “Remote operation overcomes the issues of having to unlock the device to activate the panic button or accidentally setting off false alarms when using a ‘shake to panic’ type of activation.”

Dale adds, “Vismo will continue to offer its security code enabled ‘standalone’ panic button for those users who keep their Panerei or Rolex on their wrist. We always recommend users install that button in the dock of their iPhone for ease of access.”

When activated by its panic button, the app instantly alerts a security centre and automatically sends covert audio recordings from a phone/iPad/Apple Watch in real time to the centre. It asks the sender to report what the problem is or, if it already knows, the centre will give advice to the user including where to go to that is safer and what else to do.

It will also advise when emergency services will respond. During an incident, the app user will typically be in two way communication, usually but not always via text, with a security centre.

Businesses can track and give advice to their staff via a secure website.

Vismo app users have been given advice or helped directly in a number of terrorist and kidnap related incidents, from Afghanistan and Iraq to Paris [during the Charlie Hebdo shootings and the related supermarket hostages situation in January 2015], and Tunisia, during the beach and hotel shootings in June 2015.

Note to the press: for further information please contact